Thanks to the Leinster Leader for this week’s report of the public part of last Wednesday’s Kildare Wicklow Education and Training Board (KWETB) board meeting.

Before the discussion of the minutes from the previous meeting of the board (held Sept 27th) were raised on the agenda of last Wednesday’s board meeting (Oct 11th) I asked that the Chair, the Vice Chair and the Corporate Services manager all be deputed or replaced for the duration of any discussion relating to the investigation of the KWETB by the Department of Education and Skills

The Minutes Secretary (who is the Corporate Affairs Manager) has a senior management role in relation to one of the main areas being investigated. Chairs have had signing authority relating to the area in question. We as a board have a duty to ensure that not only conflicts of interest but any perceptions of conflicts of interest are managed. Let me be clear, I am casting no aspersions on the Corporate Affairs Manager, the Chair or the Vice-Chair – it is in everyone’s best interests including theirs to ask that they consider stepping down from their duties for the duration of the investigation, given the potential for conflicts of interest

I have serious concerns that a false narrative is being constructed in relation to the boards response to the investigation of the KWETB by the Department of Education. As a board member I am concerned that despite repeated requests we have not been provided with all of the legal advice that has been made available to the Chair and the Vice-Chair for and on behalf of the board. This is particularly worrying in light of the fact that both the Chair and the Vice Chair are reported to have taken independent personal legal advice which has not been made available to the boards. I have also had access to a document which provides evidence of a malicious misrepresentation of a private/in camera/incommittee meeting called by the Chair on September 19th. Although the meeting did not go ahead because the Chair and former Chair had acted outside their powers by calling a secret meeting, that is not what is officially documented in the memo

I am perturbed also by the Chairs decision to deviate from the standard practice of reading a letter into correspondence at the public board meeting last Wednesday 11th.
A letter from KWETB CEO Sean Ashe confirming he was attending the World Skills Conference , despite being asked to remain at home to co-operate with the investigation, was not read out at the public board meeting. No one knew where the CEO was and no one informed those present at the public meeting why the CEO was not there. There is no justifiable explanation in my mind for hiding this letter from the public.

Taking all of these circumstances into account I have respectfully asked the Chair, the Vice-Chair and the Minutes secretary to again consider their positions in order to demonstrate the highest levels of integrity and transparency in the Boards co-operation with the department regarding the investigation of the KWETB 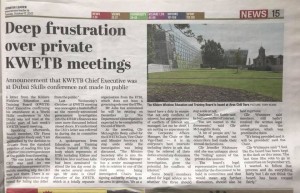 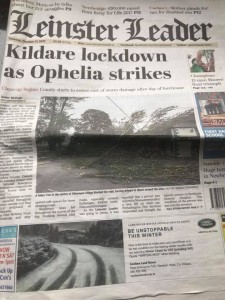